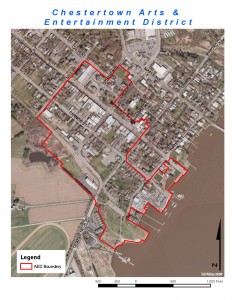 Mayor Chris Cerino announced today that the Town of Chestertown has been designated by the State of Maryland as an Arts and Entertainment District. The 51 acre A&E District includes the waterfront from High Street to Wilmer Park and extends north to Mill Street, encompassing the downtown core. (click on image of map on right to enlarge).

“Designation of the Town’s A&E District is a major step in the planned revitalization of Chestertown’s downtown and waterfront,” said Cerino. “The downtown arts scene in Chestertown has grown by leaps and bounds in the past decade, thanks in large part to local institutions such as RiverArts and the Garfield Center for the Arts. The State’s designation validates what many of us already know – that Chestertown is fast becoming a regional arts destination.”

A&E District designation qualifies artists for a Maryland State income tax subtraction for work produced and sold in a District, and property owners with an exemption from the increase in property taxes resulting from renovations for an arts related purpose. The tax incentives have the goal of encouraging arts related businesses to move to Chestertown, and are valid for ten years.

One of the most important features of the designation is the planned hiring of an economic development coordinator. The Mayor and Council authorized partial funding for the position earlier this year, and the non-profit SFW Foundation has promised additional funding to make the position fulltime.

Representing the Greater Chestertown Initiative, Lani Seikaly lobbied the Mayor and Council to pursue designation and was one of many local stakeholders who met with representatives from the State to discuss the proposed District. “Arts and Entertainment District designation is a vital part of the solution to our economic development challenge,” said Seikaly. “Tourism is important, but we also need to figure out how to create jobs that attract and retain young people who will raise their families here. Research shows us that the arts can help us realize this vision, while also making Kent County a more exciting and vibrant place to live.”