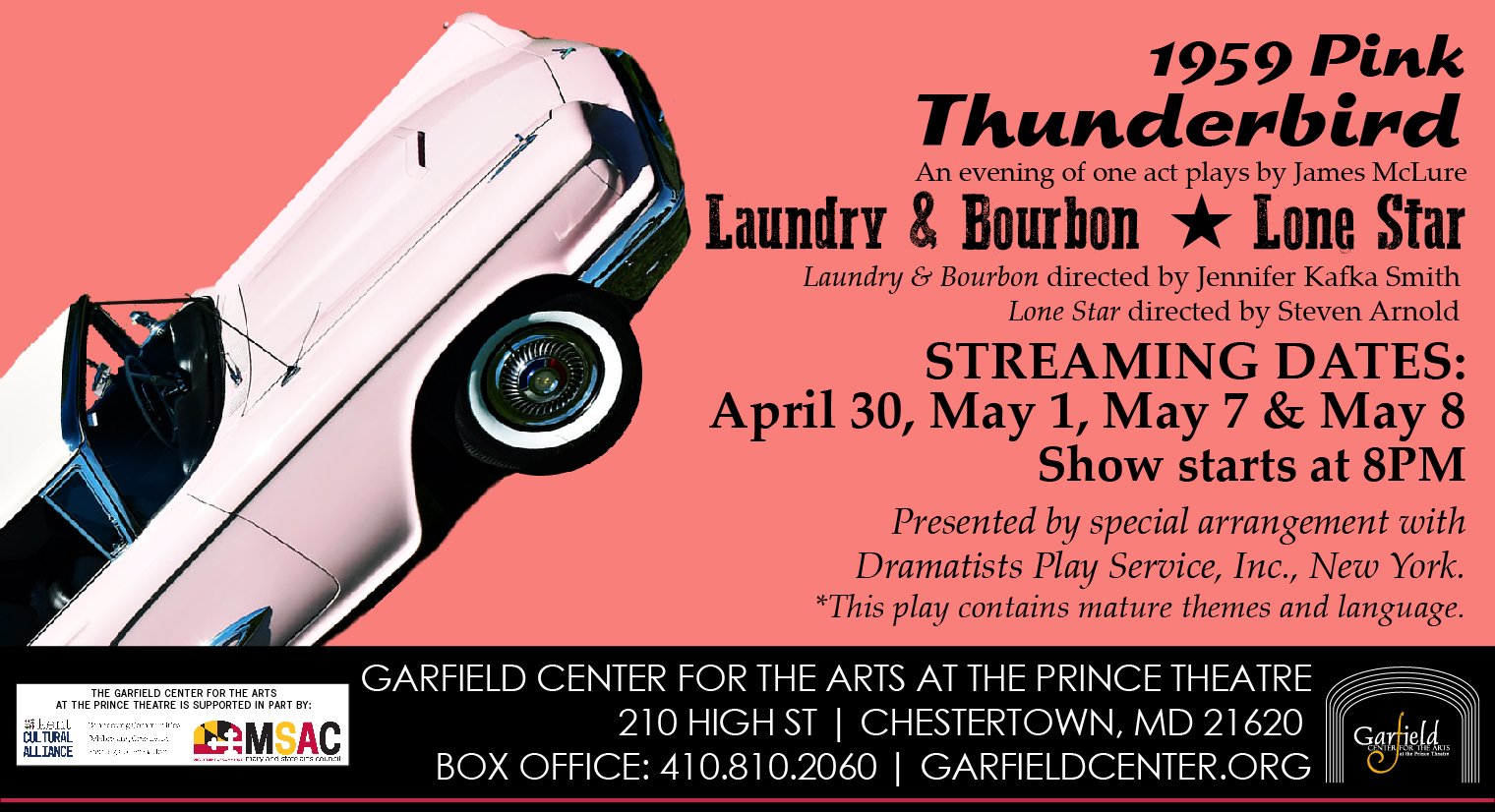 LIVE THEATRE! ACTORS ON STAGE! CURTAIN GOES UP AT 8PM! DON’T BE LATE!
The Garfield Center is excited and pleased to announce its return to live performances starting April 30th with 1959 Pink Thunderbird. Written by James McLure, the program is a presentation of two one-act plays, Laundry and Bourbon and Lone Star, which are related to one another by events, characters and plot. The production is being rehearsed and staged with social distancing and health considerations in mind, and it will be performed live from the Garfield stage and streamed online for home audiences. There will be no live audiences in the theatre. The production contains adult language and themes and is for mature audiences.
In Laundry and Bourbon, Elizabeth and her friend Hattie are whiling away the time folding laundry, watching TV, sipping bourbon and Coke, and gossiping about the many open secrets that are a part of their small-town life. They are joined by the self-righteous Amy Lee who, among other tidbits, can’t resist blurting out that Roy, Elizabeth’s husband, has been seen around town with another woman. The ensuing conversation is increasingly edged with bitter humor, but from it emerges Elizabeth’s inner strength and a quiet understanding of the turmoil that her husband has endured since his return from Vietnam. Performing in Laundry and Bourbon are Sharon Herz, Jen Friedman and Melissa McGlynn. The Director is Jennifer Kafka Smith.
In Lone Star, the scene shifts to the backyard of Angel’s, a local bar, where we finally meet Roy. Once a local high-school hero, he’s now a moody, macho type trying to reestablish his position in the community after his hitch in Vietnam. Joined by his younger brother, Ray (who worships him), Roy sets about consuming a case of beer while gradually revealing that he cherishes three things above all; his country, his wife, and his 1959 pink Thunderbird. When Cletis, the son of the local hardware store owner, arrives on the scene, the underpinnings of Roy’s world are threatened as unexpected and potentially devastating conflicts are revealed. Performing in Lone Star are Paul Cambardella, Brad Chaires and Brian Whitaker. The Director is Steven Arnold.
The production is slated for performances on 2 weekends, Friday and Saturday evenings only, on April 30, May 1, May 7 and May 8.